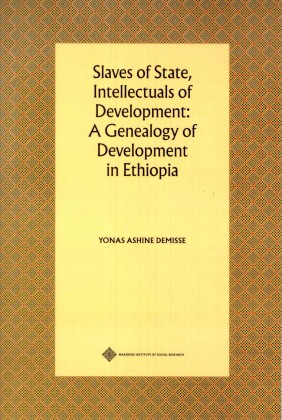 The GENESIS of this book can be traced back to 2012 when I was taking a course in the major debate on the study of Africa at the Makerere Institute of Social Research (MISR). Anchored on the state and political subject formation on the continent, the course covers thematic issues such as the state and state formation, slavery, colonialism, nationalism, and development. Reading interdisciplinary literature, we raised critical questions. Getting the question right was the holy grail of the scholarship of political knowledge at the MISR. This book is born of the tradition which cherishes asking questions as the beginning of wisdom.

Most of the questions in this book were a result of reading, discussing, and writing experiences at the MISR. Most of them are directly linked to myself and to political subjectivity in Ethiopia today. When I joined the MISR in 2012 as a graduate student, the discourse of development was in its heyday in Ethiopia. Development, or lamat, was a ubiquitous term defining the mode of rule and seductively producing development subjects. It was an adjective to many entities such as the state, political elites, party, investor, student, even abstract notions. Democracy itself was defined by development. Development is an indispensable concept in the study of state-society relations in modern Ethiopia, but its dominating tendency in the period was an invitation to many students of politics.

The first question is about the form of power that existed in pre-modern Ethiopia. I explore the dialectical link between the politics of state formation and the politics of slavery-geta-barya relations which are defined broadly as relations between superior and subordinate master-slave, lord-servant, God-believers, king-subject. I show the nature of this power and how the legacy of the geta-barya, profane and sacred power relations, shaped the modern political theology of state developmentalism.

The second inquiry explores the genealogy of present state developmentalism, which appears as a secularized but theological pastoral power relationship between the emperor as a midwife of development and the commoner as the object of salvational action by the emperor. The book shows how the discourse, institution, and materiality of development have played a significant role in the evolution of modern politics in Ethiopia.

The study was realized through upward and •downward navigation in the Braudelian longue duree historical time frame. Although I recognize the periodization in the narrative history of Ethiopia, this book freely navigates across periodization and chronology; it relates the contested formation of the pre-modern states and the emergence of the modern Ethiopian state. The book covers a long time span, connecting pre-modern state formation with modern state making by making use of genealogy. In some parts, the book focuses on selected events and episodes towards a deeper understanding of historical entities. At another time, it considers a section of history that transcends centuries as explanatory sites to make intelligible certain historical trends.

The book employs innovative methodologies, combining conceptual, ethnographic, historical, historiographical, literary sources, and archival work, putting them in conversation with each other and also subverting boundaries between them. It is a predominantly historical ethnography and genealogy of Amharic/ Ge'ez concepts and Ethiopian discursive tradition. Documents such as chronicles, newspapers, religious and literary works, novels and archival evidence, memoirs, travel accounts, and biographies are read as ethnographic sites. It does history with an ethnographic view and combines it with the genealogy of concepts and discursive tradition. It is also a discourse analysis but considers agents beyond mere speaking subjects. The book can also be read as a history of political subjects such as intellectuals, reformist bureaucrats, and popular forces. It is additionally about the political ethnography of tribute, a unit from its analysis with which any pre-modern political history of Ethiopia must begin. In the book, units such as tribute and development are seen not only as discourses of power but also as symbolic material or things or commodities, playing a role beyond production and distribution, shaping political relations. I create triple ethnographic moments in a comparative manner: subjects, discourses, and things.

The object of this book is to present a history of the state, of the political, in Ethiopia. With a background in history and political science, my interest was to study the state with its dual features: a culprit in violence and the suffering of many as well as a site for emancipation. The dual features of the state have produced a rich debate and this book will, I hope, contribute to the dialogue connecting state and society. Demystifying one pillar of Ethiopian exceptionalism, I locate Ethiopian state formation in the history of a similar pattern in pre-modern Africa, and particularly state formation in the Sudanic states. Freedom is about reorganizing the state and the society that produced it so that both enable inclusive if not egalitarian politics. Without reorganization, regime shifts—even conducting elections—may not inform redemptive politics. This interest in the structure of state power does not preclude telling stories of political subjects such as slaves, the masses or intellectuals. What would the history of the state be if not a story of political subjects?

As politics is predominantly a relation between political subjects, this book starts with slaves and elite slaves in the political realm and ends with intellectual and reformist bureaucrats within the emerging modern state of Ethiopia. In the book, I analyze the dialectical link between the politics of pre-modern state formation and the history of slavery and the politics of geta-barya (master-slave) relations. I have tried to show how slaves were formed as social, political, and economic subjects and to locate their place in the public or political realm, debunking the historiographical binary narrative of slavery in domestic space in Ethiopia and in the slave trade outside of Ethiopia. I argue that barya as a category meant multiple subjects occupying multiple relations and spaces—beyond the Atlantic model of the homogenized and racialized conceptualization of a slave as the property of a master.

This book is also a political history of the Ethiopian discursive tradition. The book frames modernity with its discursive reality, challenging the narration of modernity in association with singular spectacular moments such as war, students' movement or revolution, or the representation of personalities such as emperors as founding fathers or intellectuals as agents of change. Focusing on discursive analysis and conceptual genealogy, I have sought to make the social and popular history of political ideas in Ethiopia more intelligible. The quest for reforming the mode of politics from war, conquest, destruction, and adversity towards peace, harmony, plenty, and fraternity was central in Ethiopian popular imagination as exhibited in texts such as Fakkare /yasus and novels such Tobya, both of which are read ethnographically in this book. Popular imaginations pertaining to ideas of living in the world as a political community and anticipation of the utopia of civil and secular political leadership, yet to be realized, shaped the making of the modern Ethiopian state. The mode of Ethiopian modern politics has been shaped significantly by this discourse of progress, which has been articulated through different concepts such as carat, lamat, and galatane.

The book covers the genealogy of the idea of development, as we know it today, in Ethiopia, locating its emergence—if not the origin—in the rich Ethiopian intellectual tradition that has produced knowledge for centuries. Through this genealogy, I tell of a sacred site that reproduces the popular quest for change and transformation. I locate the emergence and evolution of the idea of the modern state, with development as its ethos, in this discursive tradition, and I hope to have convincingly depicted the textual emergence of the modern state of Ethiopia. I argue that the past was not devoid of ideas of progress and improvement and that even the very institution of slavery stood in the discourse of progress in which a slave subject was represented as an object of intervention to be baptized and cultivated as a process of integration to the host community.

Thematically, the book begins with slavery and ends with development. The connection between slavery and development as discourse and institution did not, as it might seem, emanate from a chronological succession between the two. Their similarity is that slavery and development both became sites of state formation and state building. In pre-modern Ethiopia, slavery and other institutions such as religion mobilized the masses and the elite to form the bond between rulers and the ruled. Modern power has had to rely on development to bond the ruler and the ruled. I show how the structure of power that relies on patronage endures across time, in spite of the presence of an emancipatory movement that restrains it.

The central thesis of this book is that the multiple legacies of the pre-modern state and mode of politics have shaped modern power relations in Ethiopia. State developmentalism or economic nationalism, for example, redeployed the pastoral mode of subjection, retaining the religious discourse as a form of political theology. Perhaps, as argued here, pastoral power continued to shape power and subjectivization in both pre-modern and modern Ethiopia. Geta-barya and tributary hierarchical political relations were modes or sites of pastoral power in premodern Ethiopia; state developmentalism has emerged as an alternative mode of modern power and has endured in spite of regime change, becoming the language of both modes of rule and resistance. What is at stake in this genealogy of developmentalism is not the degree of realization of the constructed utopia that developmentalism promises but, rather, what this promised utopia does to the mode of politics. I agree that power always faces resistance (as Michel Foucault theorized and Mahmood Mamdani has depicted) in the colonial environment and in the decolonizing moment. Developmentalism as a discourse of power produced a mode of rule in Ethiopia. It also shaped the mode of resistance. Politics is about how subjects interact and survive, inclusive of but not limited to the politics of resistance. This book has tried to show the mode of doing politics and surviving, and creative interaction with the mode of rule.