CALL FOR APPLICATIONS FOR ADMISSION TO 2020 CLASS 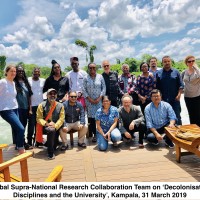 MISR Organises Inaugural Meeting of the Global Supra-National Research Collaboration on ‘Decolonisation, the Disciplines and the University’, March 30-31, 2019

On 30-31 March 2019, MISR hosted a symposium to plan for a five-year research collaboration entitled: “Decolonisation, the Disciplines and the University”. This initiative is based on a $1.5 million grant from the Mellon Foundation and includes the University of Ghana; the American University of Beirut, Centre for the Study of Social Silences, Kolkata; the Ifriqiyya Colloquium at Columbia University, and MISR. The meeting was attended by researchers drawn from the five institutions.

Makerere University, Directorate of Human Resources invites applications from suitably qualified candidates for the position of Finance and Grants Coordinator at the University. To submit your application, use the links on the job details to access an online tool for sending full details of your biodata, education, qualifications, work experience, and all the other required information, including your Curriculum Vitae, Certificates, Transcripts and names and addresses of at least three referees.