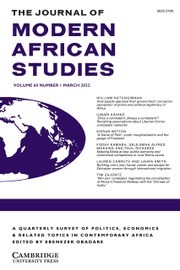 How should one read political and historical literature on modern authoritarianism, neopatrimonialism, and state formation in Africa from a Ugandan vantage point? This is the central theoretical question that Rebecca Tapscott asks in this new study on the postcolonial state in Uganda. In eight chapters, Tapscott navigates the ‘micro-dynamics of governance in Uganda’, in which she identifies a variety of modern authoritarianism thought to be peculiar to Museveni's Uganda: ‘institutionalized arbitrariness’. Based on four years of fieldwork in the Gulu, Moroto, Soroti, and Mbarara areas of Uganda between 2014 and 2018, Tapscott claims that unlike with typical African ‘neopatrimonial states’, where power is projected through ‘patron-client relations’, the main objective in Uganda's institutionalized arbitrariness is to undermine ‘threats to its authority (3). The point is to ‘embed the regime not just in the state but also in society (200).

Early in the book, Tapscott rightly notes that ‘arbitrary governance is indeed tied to historical factors, such as the postcolonial nature of the state’ (10). The book's historical chapter (Chapter 3), however, surprisingly locks the debate to the postcolonial period. If the distinctive feature of the state in Africa is its postcolonial nature, what is the place of colonial political modernity in the emergence of institutionalised arbitrariness? Asking such a question would definitely imply approaching this book's research object differently, and questioning knowledge produced through a conception of postcolonial temporality as the beginning of time. Overall, if this book's major downside is its limited historicisation of the state in Uganda, its strength is in its detailed engagement with various manifestations of state power in contemporary Uganda. In the latter, Tapscott makes an important contribution.