Gender, Ethnicity, and Violence in Kenya’s Transitions to Democracy: States of Violence 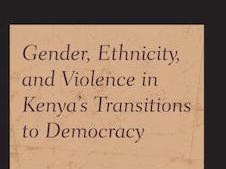 Critiquing the valorization of democracy as a means of containing violence and stabilizing political contestation, this book draws links between the democratization process and sexual/gendered violence observed against women during electioneering periods in Kenya. The book shows the contradictory relationship between democracy and gendered violence as being largely influenced in the first instance by the capitalist interests vested in the colonial state and its imperative to exploit laboring women; secondly, in the nature of the postcolonial state and politics largely captured by ethnic, bourgeois class interests; and third, influenced by neoliberal political ideology that has remained largely disarticulated from women's structural positions in Kenyan society. It argues that colonial capitalist interests established certain patterns of gender exploitation that extended into the postcolonial period such that the indigenous bourgeoisie took the form of an ethnicized elite. Ethnicity shaped politics and neoliberal political ideology further blocked women’s integration into politics in substantive ways. It concludes that it is not so much the norms and values of liberal democracy that assist in understanding women’s exclusion, but rather the structural dynamics that have shaped women’s experiences of democratic politics. In this way, gender violence in the context of democratization and electoral violence with its gendered manifestation can be fully understood as deeply embedded in the history of the structural dynamics of colonialism, capitalism, and patriarchalism in Kenya.